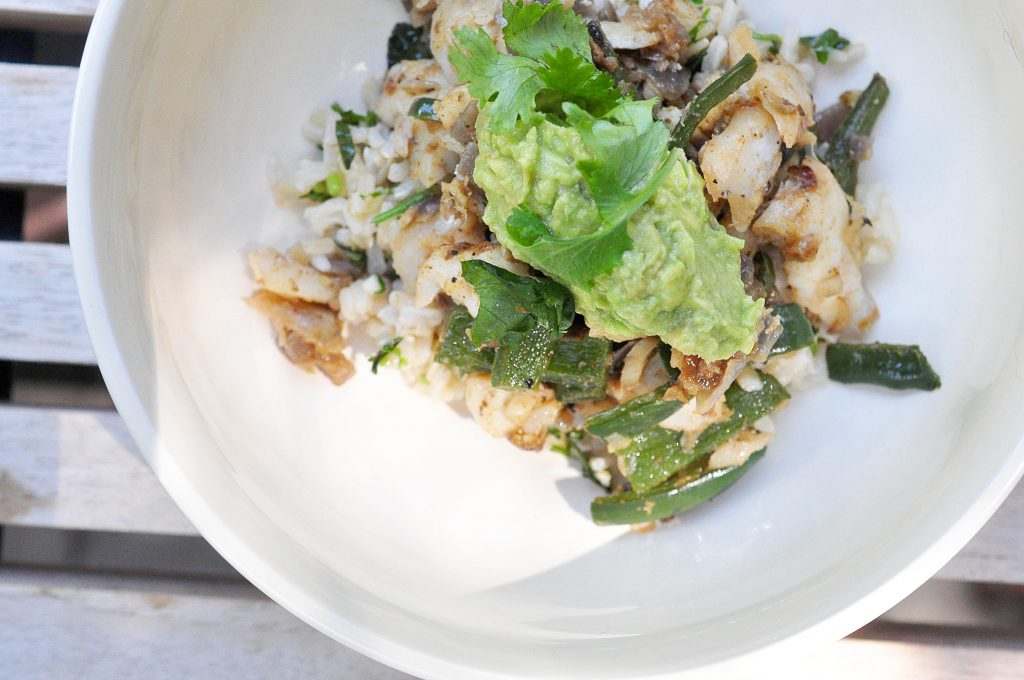 Everyone loves burritos! Or so it would seem from the line-ups at every burrito joint from chipotle to like… all those other ones? But you guys, they are really easy to make! And if you make them yourself they don’t end up being quite as gut-bustingly massive (unless you want them huge in which case, again, you can have what you want). So here is a simple white fish burrito with poblano strips and onions as the vegetable and a super cilantro-y rice to make it a bit Chipotleish (cilantro haters can sub parsley or basil).

But Leanne, you say, there are so many scoops they use! Won’t that take forever? Not really! Yes, you do have to have a few components so it’s not as efficient as a one bowl meal, but you can make the rice and vegetables and/or beans in quantity and just change up the protein filling. Then you can eat burritos everyday! And that’s the dream apparently.

Oh, and they are cheap! Like, really quite cheap. Rice, beans (today I’m skipping the beans but feel free to add them), some veggies and meat, fish or more beans. So the meat or fish is the expensive part, but you don’t need much of it. This recipe only uses 2 cod filets to feed 4 people.

Poblanos can be a little expensive so you can totally just use bell peppers or anaheim peppers, but it will change the flavor. I am a poblano fiend so I like to splurge on them. The fish is simply cooked on the stove top with salt, pepper, cumin, oregano and a wee dash of cayenne. There is a lot of flavor here though so if you want to just do salt and pepper that is fine too!

I used brown rice because that is my preference and what I tend to have around, but white is just fine as well. The rice cooking time is the only thing that keeps this from being a lightning fast meal to put together. So put the rice on first or if you have leftover rice or a little leftover takeout rice container (I have these A LOT) you should have this on the table in 20 minutes. I like to put the rice on and then be super slow and chill about making the rest, listen to a podcast, organize the kitchen, that kind of thing.

Burritos are so easy and crowd-pleasing, it’s a great place for new cooks to start figuring things out. And if you like this, double or triple the batch or at least the rice and vegetable components and make your own burrito and burrito bowl creations later in the week. Have fun assembling! 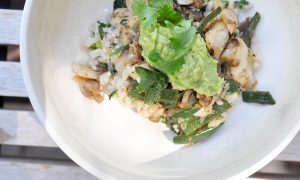 Green White Fish or Burrito Bowls
A simple white fish burrito with poblano strips and onions and a super cilantro-y rice to make it a bit like Chipotle.
Ingredients
Instructions